Prices subject to change without notice 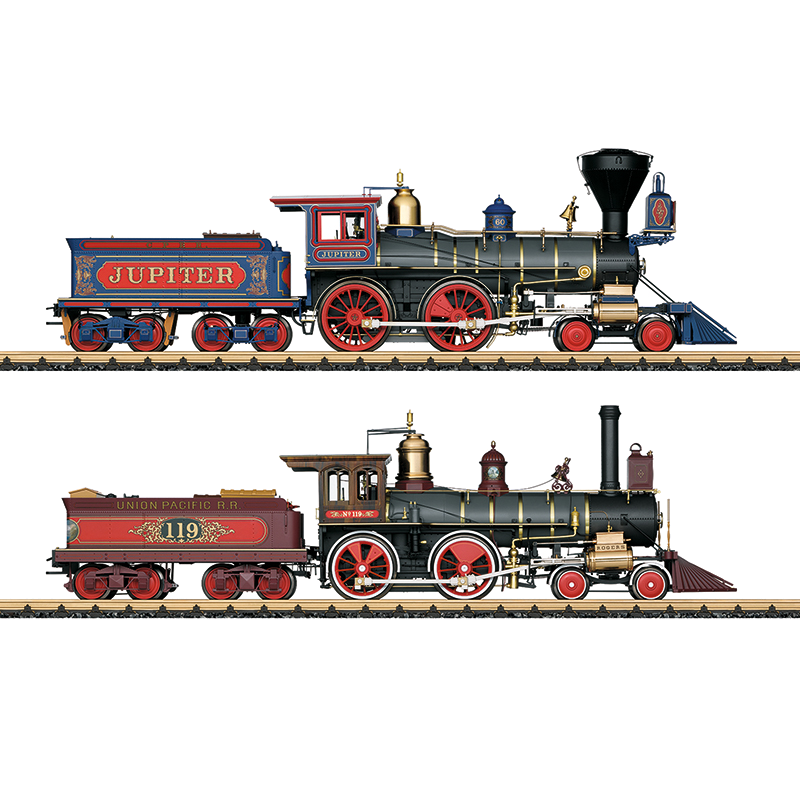 This is a set consisting of two steam locomotives as they looked at the opening of the first transcontinental railroad in the USA. The construction, paint schemes, and lettering are the same as the two replicas - Union Pacific RR locomotive "119" and the Central Pacific RR "Jupiter" locomotive as they presently are at the memorial site at Promontory Summit in Utah.
These are finely detailed models with heavy metal construction including many separately applied details. Each locomotive is driven by a powerful motor, has an mfx/DCC decoder with many light and sound functions such as headlights, cab lighting, firebox lights, and much more. The running sounds and a whistle and bell activated by reed switches will also work in analog operation. Each locomotive has a built-in smoke unit with steam exhaust synchronized with the wheels as well as cylinder steam and steam exhaust at the whistle, when the latter is activated. The cab doors and smoke box doors can be opened. There is a detailed working link & pin coupler on the tender and the cowcatcher on the front has a separately applied, movable draw bar. The running gear mounted inboard on the locomotive frame is fully modelled and moves.

A reproduction of an American track spike – constructed of metal and genuine gold-plated – is included with the models. In addition, there is also a flagstaff to go on the locomotives and it includes an American flag.

The locomotives are packaged in a quality wooden case.
Figures of locomotive engineers and firemen as well as LGB standard couplers and American knuckle couplers are also included.

This set consists of two steam locomotives, "119" of the Union Pacific Rail Road and the "Jupiter" of the Central Pacific Rail Road.  The construction, paint schemes, and lettering are the same as the two replicas as they presently are used at the memorial site at Promontory Summit in Utah.

For videos and more information on the set please visit our Youtube page: